Hilton McBroom & Herb Farrington opened Service Electric Company in above said attic.  In order to survive during the Depression, any and all repair services were offered – residential auto repairs, home appliance repair and starter and generator repairs for businesses.

The repair business grew and the company was moved from the attic to a garage at 939 West 30th Street.  Herb Farrington went out on his own to start HF Electric and Hilton took a former GE engineer, Robert Goslin, (“Duckie”) as a partner.  They got out of the home appliance and auto repair business and concentrated on auto starters and generators for cab and truck fleets.

Small motor service business was increasing and the business expanded to a large garage and room in a house at 939 West 30th Street.  Later in the year, another move was made to 619 South Illinois Street.  Hilton and Duckie also brought on a new partner, Tom Waggoner, a foreman at Meyer Electric (now Brehob).  The move was made and again the name changed – this time to Electric Manufacturing Company. 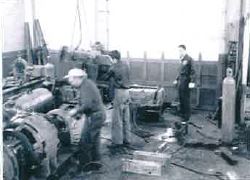 Hilton decided to “go it alone” and rented a 720 square foot storeroom at 916 North Illinois Street and the company name was changed again to McBroom Service Electric Company.

Fred McBroom was the lone employee during the war years – the company survived on electric tool repair and war-related sub contracts.  Hilton became plant manager at Stewart Manufacturing until 1945.  When he returned they exited the automotive starter and generator business by selling it to Automotive Armature.  The business focus was now on industrial motor repair.

A 3,600 square foot facility was built at 3301 North Illinois and the name changed to McBroom Electric Company.

United Motors Service, a division of GM that serviced Delco Products, decided to leave the service arena.  McBroom purchased this operation for about $8,000, gained 6 workers and about 200 fractional horsepower motors to service weekly.  A big boost in business!  McBroom’s charge at the time to repair a motor: $9.95 !

20 acres of land was purchased from the Indianapolis Water

Company and plans for a new 45,000 square foot building in McBroom Park were in the offing.  The building plans called for two stories in front with a third lower level as a support area.  It was to have 3 creanes with 3, 5 and 7.5 ton capacities.  3,600 square feet on the upper level was planned for future office expansion.  A loading dock and a gas pump were also planned.  The lower level was available to large trucks to unload in bound shipments and to outbound by common carrier.  Space was also set aside for an engineering department.  All electric power was to be supplied by bus duct at the lower level ceiling with holes through the floor at the machines to keep the overhead area clear for cranes. 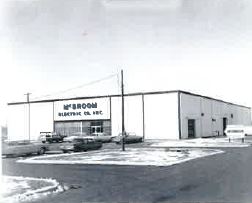 The building was complete and equipment and workforce moved in.

Fred McBroom elects to retire and the business is purchased by Richard McBroom.